Combine flour, sugar and yeast in a large bowl of an electric mixer fitted with a dough hook. With the motor operating on low, gradually add egg mixture. Increase speed to medium; knead for 10 minutes or until dough is smooth, elastic and forms a ball. Transfer dough to a lightly greased large bowl. Cover and stand in a warm place for 1½ hours or until doubled in size.

Place donuts on a lightly floured large baking tray. Cover and stand in a warm place for 1 hour or until doubled in size. (This proving process is important so the dough fluffs up when fried.)

Heat the oil in a large saucepan to 180°C on a sugar thermometer (or until the handle of a wooden spoon bubbles when placed in the oil). Deep-fry donuts, in batches, for 1 minute each side or until puffed and golden. Drain on a wire rack. Toss donuts immediately in cinnamon sugar.

To make pink icing, whisk icing sugar and the water in a small bowl with an electric mixer on low until combined. Add food colouring and whisk until well combined and smooth. If icing starts to thicken, stir to loosen.

Dip donuts, one at time, into icing, allowing excess to drip off. Place on a wire rack over a baking tray.

Spread each slice of bread with butter. Sprinkle with 100’s & 1000’s. Remove crusts and cut into quarters.

Top each donut with two fairy bread pieces. Stand for 30 minutes or until icing is set.

Mix the icing and food colouring well so there are no streaks. Don’t let the icing set before adding the toppings as otherwise they won’t stick. 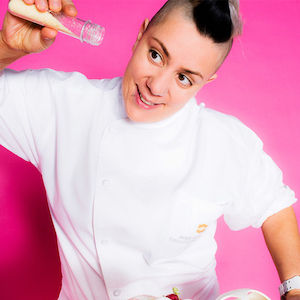